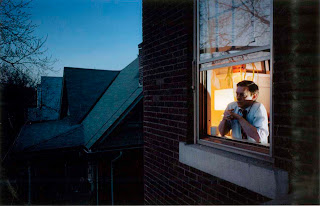 Hartford, 1979
Philip-Lorca diCorcia
I think this is one of the most powerful images I've seen. It seems almost solidly still - calmly banal but filled with emotion. This picture doesn't attack or offend or shock, but it screams a silence at me. We see a man, staring out a window. He seems entirely detached from his surroundings, searching, beyond our view. We see a man that seems an icon of american society, a pioneer of that american dream. Dressed in suit and tie, early or late, with coffee and cigarette he is here, at this moment, searching for something else. Here, we see a man that is sad.
I find myself following his gaze. I notice a tree creeping into the frame. Looking closely, I see there are little buds - it must be spring. It looks black against the fading sun. Then I notice a potted plant in the man's house, an all year green lit yellow in an artificial light.
The man lives higher than his neighbours. The staging of the photograph places us at an imaginary point, floating outside his apartment, looking at him, who in turn is looking for something else. The brick facade of his apartment takes over half of our framed view - takes priority over the natural world in the background.
Posted by Caroline Kiernan at 5:07 PM No comments: 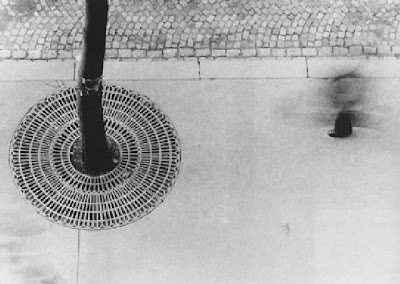 I chose the photograph “A Pedestrian Walking” by Otto Steinert, taken in 1951 in Paris. Steinert was a founding member of Fotoform and throughout his life espoused the idea of “subjective photography”, which values the photographer's personal interpretation and vision, often in abstract forms, over documentary realism. While personally I believe that both forms of photography is important I do think that the photograph highlights the fact that the medium can go beyond simply framing a snapshot of a moment in time, to creating images that one simply cannot otherwise see.

The photograph is impressive on a technical level for the difficulty involved with getting the right shutter speed to blur just the body of the pedestrian while leaving his leg sharp, and I believe is excellently composed with the solidity of the tree contrasting the pedestrian. Though the image is composed of mundane everyday objects - footpath, road, tree and pedestrian, it is framed in such as way as to create abstract shapes with them, and ironically, while the photograph captures movement, the overall image feels static.
Posted by Su at 4:15 PM No comments:

This is a photo by Peter Buckley from 1957. It is part of a series taken in Bilbao to capture the drama of a Bullfight.
I chose this picture for a few reasons. Firstly, i really like the strong stylized composition of the photo, the steep triangular form created by the two figures and the contrasts between the two.
I also like the drama of the narrative and the action in the picture. The arrogant pose of the fighter as he leads the bull behind his back and the look of surprise on the bulls face as he realizes that he has been tricked. There is also the realization that this is near the end of the fight, with the Bullfighter in control, and Buckley captures an almost 'human-like' expression on the bulls face, as if the bull himself realizes that the fight is lost. 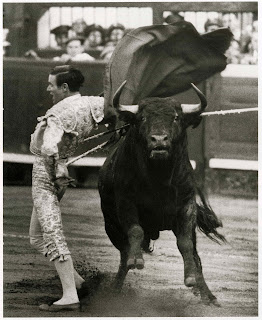 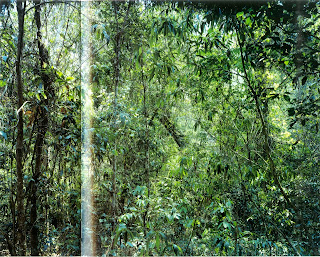 
I chose a photograph by Thomas Struth from the book “The Nature of Photographs”. It is part of his “Paradise 9” series. I chose this photograph because it revealed to me how photographs do not have to portray a specific image of an object but can infact let your mind reflect on the image and come to its own conclusions. Thomas Struth took this photo and others of the jungles of Australia, Japan and China. However he took it with the notion in mind that he was not portraying a specific place or country, rather just a scene that could be located in numerous places. The photo presents a kind of empty space, allowing the observer more room for inward contemplation. There is no context, social or cultural, to be discovered. He has changed the use of the photograph. It is called an “opaque” photo.
Posted by Orla Phillips at 11:01 AM No comments:

We touched on some interesting subjects in our first discussion.
Prior to our visit next week to IMMA to see & discuss 'Picturing New York', it would be good to post our initial photographic selection with a brief description on why we chose it.


I chose the above photograph.


The building offers the women a safe vantage point to view the parade, removing them from the action. They are passive observers but their faces and expressions are obscured from the observer and each other– by their building and their flag. There is a sense of dis-connection.

The photograph is, I feel, a combination of a snatched moment of time (perhaps it was momentary that the flag blew in such a way while they were standing in adjoining windows) and carefully considered framing. The selection of this frame exposed a spatial relationship but also clearly communicates something of Frank's observations on American life.