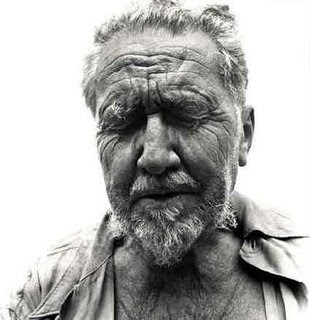 One of America's most influential photographers, Avedon was born May 15th 1923. When he died in 2004 the New York Times said "his fashion and portrait photographs helped define America's image of style, beauty and culture for the last half-century." Originally a fashion photographer he went on to photograph the fall of the Berlin Wall, Vietnam war protestors and patients in mental hospitals. He had always been interested in portraiture and how it captures the personality of the subject. During sittings he would ask probing questions in an effort to evoke something that others could not. He is identifiable by his minimalist style. Sitter look straight into the camera in front of a white background.

Erza Pound is an American Poet who was a major figure in the early modernist movement. After the extreme loss of life of WWI he lost faith in the West, blaming capitalism for the War. He became a supporter of Hitler. During WWII he made radio broadcast condemning the USA and criticising Jews. When the War ended he was arrested for treason in 1945. This picture is taken in 1958, the year he was released from prison after a campaign by his followers.

Posted by sarahmckendry at 4:22 PM No comments: Links to this post