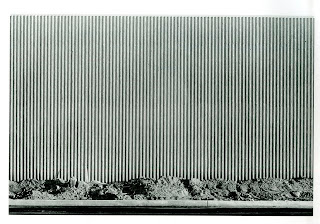 Lewis Baltz's dispassionate eye neither suggests nor implies a hidden meaning in his photography. He documents fact through vigorous clarity and detail. His documentary collection, 'The New Industrial Parks near Irvine, California' allows the viewer an insight into the changing topography of what was once a natural landscape unscarred by man. Lewis Baltz is an icon of "The New Topographics" a movement of photographers who sought to capture "a man altered landscape" in the seventies. These stark photographs isolate fact and do not seek to imitate. 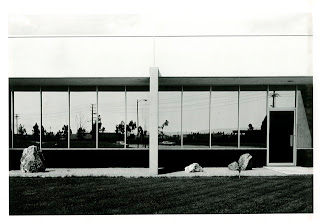 Baltz believed in viewing the series as a collective whereby one single photograph did not have precedence over another. This reinforces the idea that the suburban typology was to be read as a whole, its physical reaction with landscape and vice verse. Baltz does not hint at the use of the building nor its habitation and labels all photographs. They are what they are. 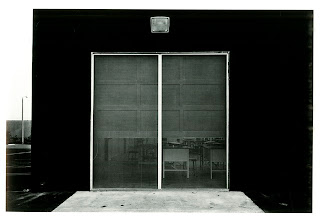 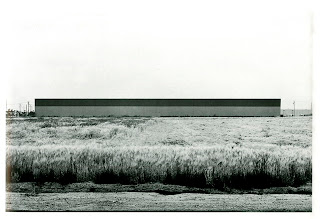 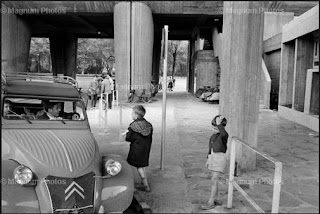 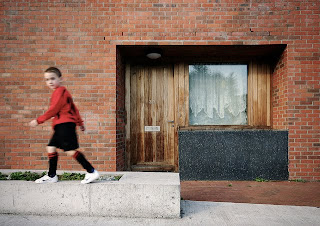 Architectural photographs of today are almost always taken when the building has just been finished and before the clients properly occupy the building. The images can be the culmination of weeks of pre-planning, site work and post production when they are subject to the rigours of photoshop; being edited, cleaned up, stitched or sandwiched. The result is a constructed sleek image demonstrating the key ideas or design principles of the building, something architects rely heavily on when discussing their work.

I’m not criticizing this process but instead what I’m interested in is what happens after the initial burst of excitement when a building is finished. How do people inhabit the building? How does the building change or adapt, expand or contract over its lifetime? How do people make it their own? Alice recently presented a lecture that talked about photographing O’Donnell + Tuomey’s Howth House years after it had been finished. The pictures, untypical of the original shots, showed relatively little of the overall house but focused more on the life of the building at a smaller scale through texture, surface and material. It showed how the owner had made the house her home. This was something I found truly fascinating.

Emmet Scanlon also presented his house at a lecture a few weeks ago. It was interesting because he looked at the house not only from his point of view as the architect but as the homeowner. He showed a number of slides demonstrating the lifecycle of his garden over the course of a year and how it changed from season to season. Architecture and time, be it long-term or short-term, is something that we talk about all the time but rarely document. Even we consider a building finished when in reality it’s only at the beginning of its life-cycle, an empty shell ready to be inhabitted.

My proposal is to curate an exhibition where architecture is represented in the everyday, where we see a home in a different manner and a different time than we architects usually see them, where we look at a building at the scale of a person rather than the scale of a site. Rem Koolhaas made and released a film recently where he examines the famous “lift house” he designed in Bordeaux from the point of view of the cleaner (possibly inspired form the famous shot of the cleaner in Mies van der Rohe’s Barcelona Pavilion), at a time after the owner of the house had passed away. It sets up an interesting (and funny) play between time and scale and thus is a good reference for what I want to do. 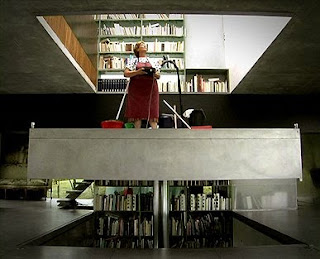 Posted by conor at 8:07 PM No comments: Links to this post 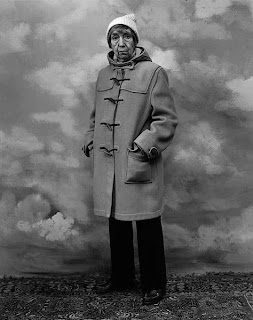 Berenice Abbott's anxious energy led her to the playground of the avant-garde artists, Greenwich Village, New York from her home state of Ohio in 1918. She pursued journalism and later became enamoured with the world of sculpture and poetry, possibly due to her association with Man Ray, Eugene o'Neill and the poet and critic Sadakichi Hartmann. It was not long before the vulgarity of capitalism slurried the streets of their bohemian haven and so Abbott left for Paris along with her dadaist counterparts.

Abbott studied sculpture in both Paris and Berlin however it was not until 1923, due to a chance encounter with Man Ray, was Abbott to cultivate her future as a successful photographer. Ray, requiring an assistant with no experience and who would "do what they were told to" hired Abbott in his studio in Montpernasse, Paris. Abbott flourished in the field and to "be done" by Man Ray or Bernice Abbott was a passport to prestige. 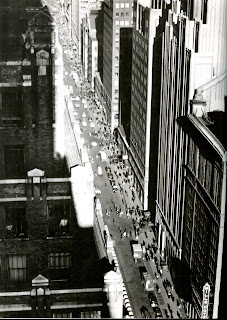 Man Ray introduced Abbott to the work of Eugene Adget, a documentary style photographer who had captured the "sobering effects of the depression" in Paris. He became Abbott's unwitting mentor, "Adget's photographs somehow spelled photography to me". On his death in 1927 Abbott aquired Adget's entire collection of plate glass negatives and a total of 7,800 prints for fear they would be lost. Adget's ability to capture the complexities of human emotion through the banal settings of the Parisian streetscape aroused Abbott's psyche so much so that she sought "to do in Manhattan what Adget did in Paris" on her return to New York in 1929.

Requiring the inherent clarity that transposed onto Adget's prints Abbott bought an 8X10" large format camera. Dispelling her peer, Pierre Mac Orlan's definition of photography as 'plastic' and 'documentary' Abbott sought to emulate the "feeling lurking beneath the the surface of ordinary experience". 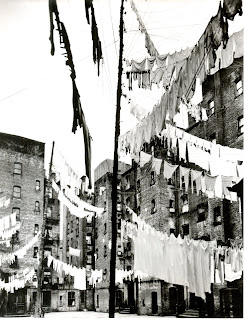 Abbott studied the photographs of Mathew Brady who created a photographic record of "a turning point in American history". Abbott failed to get financial support for six years until the Federal Arts Project hired her in 1935. This allowed Abbott to photograph New York's physical ascendancy and "capture disorientating sensations of city life". 'Changing New York', Abbott's masterful collection of New York City life was finally exhibited on October 20th 1937. 111 prints mounted in a series from one to four were exhibited for six weeks due to demand. Her collection along with Walker Evans for the International Exposition of Photography at New York Grand Central Palace for the FSA 'How American People live' was seen as "the most exciting and important photographs". Changing New York is the definitive anthology of Abbotts legacy as a photographer who captured human identity through the poetry of contrasts. 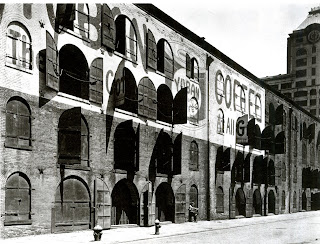 My photographs are to be documentary as well as artistic,

the original plan, this means that they will have elements of

formal organization and style, they will use devices of abstract

art if these devices best fit the given subject, they will aim at

realism, but not at the cost of sacrificing all esthetics's factors.

They will tell facts...but these facts will be set forth as organic

parts of the whole picture as living and functioning details of 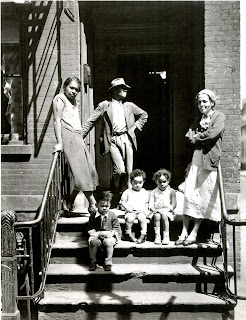 Posted by LAH at 5:28 PM No comments: Links to this post