Throughout both pieces of work there is the idea of the democracy of the image. Sternfeld elevates the importance of the humble potato field, carefully crafting and working the land for images. He is not focused on capturing the spanning vistas the site offers but instead searches for the quieter moments. Soth moves through the landscape showing the same respect to the landscapes and the portraiture of people he encounters. The landscapes in Mississippi tell us as much about these places as its people do. Soth, like Sternfeld, also refrains from the sweeping vistas of the Mississippi stating that ‘you carry it in your head’ as one views the book.

The idea of moving through a landscape bestowing merit on all things equally is similar in a way to the idea of the river moving through the land encountering various changes along the way. The rhythm of the images is dreamlike however Soth is not passive in his photography. Although there is a feeling of passive wandering the character of the photographer is evident in every photograph. There is also a notion of integrity, this great body of water snaking through the landscape accepting the changes time inflicts upon it. The towns and cities that relied on the river to sustain them in the past now find themselves isolated and in decline. The river has not changed but with the passage of time the places and people that occupy its shores have. Soth captures these places and the characters with an empathy and respect. 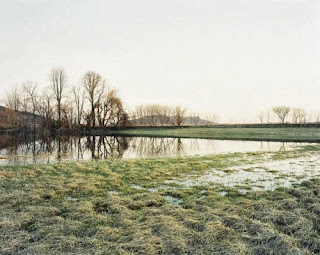 This idea of the integrity of the landscape is also evident in Sternfeld’s Ox Bow Archive. Referencing the Thomas Cole painting of the same landscape, the body of work provides a commentary on the inflictions of time and modern culture on this particular landscape. This field, devoid of the ironies and maniacal characters of small town America in American Prospects, is banal in every sense. Sternfeld seems to rejoice in this, the majesty of the mundane. The photographs are all  without people - a significant departure from his earlier work. It is interesting to note that in this documenting of a potato field, arguably the antithesis of the epic road trip, Sternfeld addresses some of the bigger themes of modern life. The brevity of life, the mundanity yet inevitability of death and the irrepressible passage of time are all present in the images.

Thinking of Sternfeld as the settler working his land, we can imagine his produce as this volume of images. The methodical walking and photographing of the land, akin to the ploughing and reaping of crops, imparts an intimate knowledge of the landscape. By exhibiting the restraint to stay in one place, resisting the urge to wander, Sternfeld gains a deep affinity with his chosen freehold which is evident in Ox Bow Archive.
Imagining Soth as the nomad to Sternfeld’s settler, the images in Mississippi imply restlessness and a need to keep moving typical of the hunter gatherer. Never resting too long in one place, Soth’s narrative is poetic and dreamlike as opposed to Sternfeld’s comprehensive documenting of the land. The nature of poetry, in that it is suggestive of a whole but never complete, is similar to the structure of Mississippi. It is almost like awaking from a dream with fragmented images and trying to stitch together the stream of consciousness. The prevalence of beds in Mississippi, including that of Charles Lindbergh, only serves to underpin this state of conscious dreaming and landscape.

"Over and over again I fall asleep with my eyes open, knowing I'm falling asleep, unable to prevent it. When I fall asleep this way, my eyes are cut off from my ordinary mind as though they were shut, but they become directly connected to this new, extraordinary mind, which grows increasingly competent to deal with their impressions." 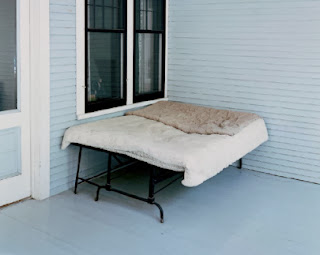