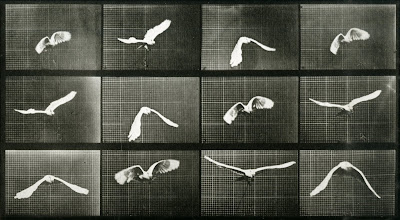 Eadweard Muybridge was an English born photographer who worked mainly in the United States. He had early success as a landscape photographer and became widely known, under his psuedonym Helios, for his images of the West including Yosemite and his early panoramas of San Francisco.
Muybridge is most remembered for his pioneering work on animal locomotion and his early motion picture projector which he called a zoopraxiscope.
After he was challenged by the Governor of California Leland Stanford to capture an image of a horse galloping with all it's hooves off the ground, Muybridge developed a technique to capture the motion of animals using a bank of cameras timed to release the shutter in quick succession.
Following the success of these images Muybridge spent a number of years working with the University of Pennsylvania and the local zoo capturing over 100,000 images of animals and humans in motion.

Many of the these images work together in sequence to show the mechanics of motion and were a form of early videography. This image doesn’t show the motion of flight of the bird as clearly as many others do but seems instead to examine the figure of the bird at various stages of flight. Each frame can be read in isolation to examine the figure in abstraction or the group of images can work together to show a typology of form and figure from a single perspective.

Posted by Philip McGlade at 2:09 AM No comments: