After studying these 4 photographers a little closer, and more specifically their series of subway photography, a thing I noticed was the photographers relation to the subject.

Evans and Delaheye uses the same method of a hidden camera in order to photograph people unaware of the situation. The motionless images allows us to linger in the faces of ordinary people, which the social rules of society won´t allow us in public.
on the contrary Davidson and Wolf is very much in your face photographers.
Davidson directly asks people if he can take their photo and their by gain a sort of reconstruction of the scene he was interested in to begin with.
And Wolf takes the photos as the train doors shut close on a stuffed subway. He´s object are unwilling participants in the images, and he gains that imitate reaction on peoples faces when you invade their personal space.

So the question is then - as I noticed in the last post – do we learn more about a person form them not knowing or from allowing them to participate?

"I stole these photographs between ’95 and ’97 in the Paris metro. ‘Stole’ because it is against the law to take them, it’s forbidden. The law states that everyone owns their own image. But our image, this worthless alias of ourselves, is everywhere without us knowing it. How and why can it be said to belong to us? But more importantly, there’s another rule, that non-aggression pact we all subscribe to: the prohibition against looking at others. Apart from the odd illicit glance, you keep staring at the wall. We are very much alone in these public places and there’s violence in this calm acceptance of a closed world.
I am sitting in front of someone to record his image, the form of evidence, but just like him I too stare into the distance and feign absence. I try to be like him. It’s all a sham, a necessary lie lasting long enough to take a picture. If to look is to be free, the same holds true for photographing: I hold my breath and let the shutter go."  - Luc Delahaye, L’Autre, Phaidon Press, London, 1999 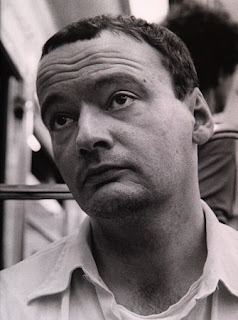 Luc Delahaye is a french photographer who started as a photo journalist in the 1980´s, he is particularly known for the work he did doing war in Afghanistan, Lebanon and Yoguslavia. In the beginning of the 1990´s he started to question the work he was doing; “ I had lost my faith in photography and I wanted to understand what it really is about. So I decided to see what would happen when no photographer is there, just the subject and the camera”
His first more contemporary project was “Portraits”. A project were he would ask homeless and poor people to have their portrait taken in a photo-booth, and thereby removing himself from the process. “They sat in this cramped booth while I was looking away; in the solitude of their experience they were confident in the machine, they knew it´s power of revelation. Those who have lost everything in life have nothing to hide, they are naked.”
His next project was L'Autre. For almost 2,5 years Delahaye secretly photographed passengers on the subway in Paris with a hidden camera. In order to take the images he pressed the shutter as the train door closed and photograph the person sitting in front of him. In that way the camera would not be heard and the object would not react. He then cropped the images to only show the faces and a little of the background, so that each face seems locked in a mask. 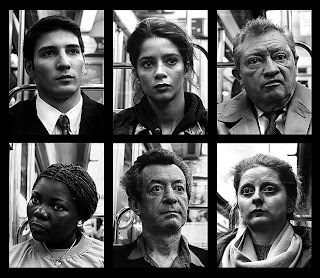 Jean Baudrillard states in his introductory essay to L'Autre; “No-one is looking at anyone else. The lens alone sees, but it is hidden. What Luc Delahaye captures then isn´t exactly the Other (L'Autre) but what remains of the Other when he, the photographer isn´t there.”
The series explores a relationship between the photographer and the object, such as the american photographer Walker Evans did it in the 1930´s - by photographing people sitting opposite him with a hidden camera. The photograph then captures an anonymity between subject and camera.

“The guard is down and the mask is off, even more than in lone bedrooms where there´s a mirror. People´s faces are in naked repose down in the subway.” - Walker Evans 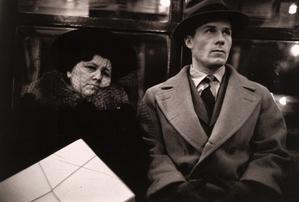 Walker Evans, Many are called

By hiding the camera the subjects do not look at the photographer, but maintains their private space. The subjects mouth are slack, their eyes are unfocused and their features are not made up for a pose.
But when you study the images the faces are no longer passive or unaware, but withdrawn like they are hiding something. We attempt to put ourselves in their place when looking at the image, in order to understand them - and maybe in the end understand more about ourselves. We try to read a meaning into their faces, and force a significance onto them.
Baudrillard writes: “There’s the same reversal everywhere, expressing a fatigue on the part of the subject, a weariness of being oneself and asserting oneself. And also the secret confused demand that the Other should think us, that the objects of the world should think us” 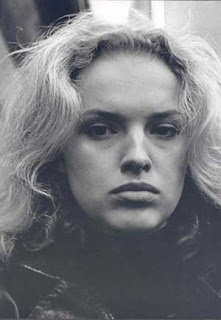 Posted by Unknown at 12:37 AM No comments: Links to this post


On the road - Bert Teunissen


Bert Teunissen’s most famous project Domestic Landscapes, a serie of photographs of European homes built before the World War II and their inahbitants, leeds the Dutch photograph to cover over 50 000 km of roads around Europe. More than a way to reach his final goal, he considered the road as a trip on its own. His book On the Road is a collection of picture taken during his travels.

“It brings me to my destination,
It is both the bridge and the barrier between me and my destiny,
It is inviting and defiant at the same time,
It is in front of me and behind me,
It can be smooth or rough,
it is the vein of my world.
When I’m on it, I’m on track
I follow its source where I will find my treasure,
And Then it will bring me back home again“

Pictures are in black and white in a 18x24 format. He took the pictures of the landscape while driving. They are framed by car furniture (wheel on the bottom and sun visor on the top), with a least one hand visible. Comparaison with Lee Friedlander’s and his project America by Car is inevitable, but both seem to reach a different goal. Friedlander focuses on landscapes, buildings, people or urban details. Car and roads are the frame, they emphasize the subject. In Teunissen’s work, the trip himself is the main subject. Photos are by the way not situated. They don’t have any legend, and may be taken everywhere in Europe. Only naturals elements such as sunshine, snow on the road or rain on the windshield vary. Even the windshield blurred in the middle of some pictures doesn’t disturb the main topic of the work, evocated by the artist himslef in the beggining of the book : a personnal reflexion about the destiny and the way to reach it.

The style chosen by Teunissen may refer to the documentary style. Procedure is very systematic, all the pictures are made from the same point of view (form the driver seat), looking straight ahead on the road with no external elements to disturb the view on it. All the picture are in black and white, in low resolution and printed on cheap sheets of newspaper. The final book is rolled up in a cardboard box.

But despite the very systematic procedure and the references to the journalistic style,  Teunissen’s work is fare from documentary. Separatly, pictures are anonymous. No detail allows us to say where or when the picture is from. But the artist show them in couple, two pictures in one page. Sometimes the two pictures are formally really closed (trees on the side, infinite perspective...), sometimes they are not. But put together, they seem to tell a story, to refer to Teunissen’s own experiences when he had cover European roads to work on his Domestic Landscapes project.

He said about it "Traveling to Bulgaria for instance is a three day journey just to get there, and then the work starts. But three days in your car - that’s a trip on its own. Traveling through a country where you’ve never been before and meeting all these people and seeing all these things... I felt like I needed to do something with that experience. I couldn’t just do it and only go for the Domestic Landscape and then come back home with nothing to show for where I’ve been. [...] I’ve been doing it for years. It’s the joy of looking. That’s what it is for me".

On the road appears like a really personnal work. It looks first of all as a thanks to the road he had to take, not as a pragmatic way to reach a place from anothor one, but as an important part of his artistic process.