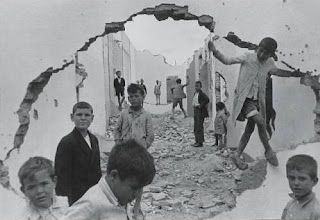 The reason i chose this picture is because it affected my emotion in a different way.

Afterwards i started to consider  the expression of the children faces. In some faces you can see a sadness and a desperation that appears to reflect  the devastation of past happenings. I myself can could feel the hopelessness and sadness.

Something stopped me going futher in. I realized that i have had this impression the whole time, but i couldn’t find out what caused this. The wall is a barrier stopping me from entering into the story captured by the photographer. The hole in the wall has created a distance between the contemplator and the picture. It is also responsible  for the deepness in the picture and it gives the picture a better and stronger focus of the story.

And  i also think that the children are devided in three different groups of character by the wall.

The children in the foreground seem curious and more open, the children in the middle ground appear afraid, hanging around and don’t no what to do and the children in the backround - they are playing with stones against each other and two of them are standing there with a stone in their hand and looking directly in the camera as if they want to warn the photographer.

Even though i knew that the picture was taken in the 1933s, I get the feeling that this picture is timeless, it could also has been taken yesterday.