As was mentioned last week, my initial investigation into the housing estates of Cahir was heavily research based and confined to the documentation of form, or at least elevation. At the time, I had Walker Evans' series on Victorian Architecture on my mind, and I while it was a worthwhile exercise, the style and format of the images proved limiting. 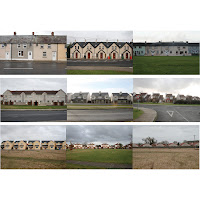 During my second round of photography, I began to deviate slightly and began photographing the corners of housing rows, the gaps and views in between, and the relationship of building to landscape.
I think though, I have a fair idea where I want to go next. Having looked at the work of William Eggleston in his publication "Los Alamos", I'm interested in how he captures a range of everyday objects into a unified visual world, perhaps thanks to his unique use of colour. More particularly though, I'm inspired by the range of his subjects and styles which seem to vary from the documentary to the highly subjective, and from personal portraits to non-specific human landscapes. Yet somehow avoiding a messy eclecticism.

I think this project could be focused on a single concept (albeit a rather broad statement):
If the housing estate is just a place where people live, then what is it like to live in?
Is it good? bad? or really, really average?
Where do kids play? Where do neighbours talk? Where's all the stuff beyond the houses... the washing lines, the strewn toys, the dirty boots and garden furniture?
Whatever emotions and opinions exist perhaps the point is that they're far more kaleidoscopic than presumed and that a greater range of photographic techniques and subjects may be required to express this.
I can't help but think that the face it shows to the world is not all the estate is, or could be.

Posted by michael.hayes at 3:45 PM