At heart we are all inherently nosy creatures. We all have voyeuristic tendencies to observe people from a far. Architects observe to learn from how people inhabit places and spaces. Old women peer out from behind net curtains to survey the activities of her neighbours. There is a thought that through a window, from a balcony or from a garden we put on an exhibition to the world and in turn the world looks in. 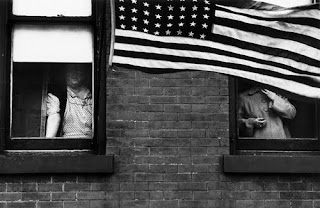 A situation arises in dense areas of cities where tall buildings are built close together that, despite being no physical connection; a strange relationship exists between the occupants of one apartment to another at the same level across the street. In his famous photograph from the book The Americans Robert Frank captures this phenomenon with two women looking out at him, one of which’s face is being covered by the American flag.

However this has taken on a new dimension since the widespread construction of high rise buildings with glass curtain wall facades. During the day the city is reflected back on itself from the surface of the glass. In contrast at night when lights shine a whole new depth is revealed and we get an insight into the soap opera that is people’s daily lives. As I said it is as if the habits, rituals and activities of the occupant are put on display to the city. 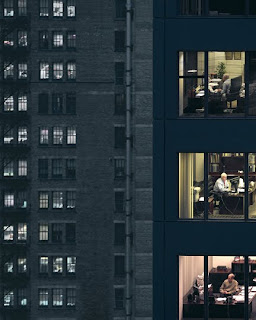 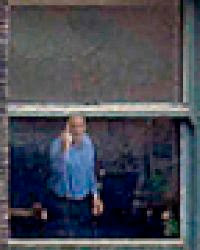 In his exhibition for the The Museum of Comtemporary Photography in Chicago called The Transparent City Michael Wolf documents this theme with a series of photographs looking from the roof or balcony of one high rise building to another exposing the daily activities of the occupants. He tells of how he had the fantasy that he would spend 5 or 6 hours every night on a rooftop and would look into every window and see all the thrilling things that would happen. But in reality all he ever saw was what he considered boring; people from the ages of 25 to 40 eating, sitting and reading, the majority of the time alone. Disappointed, he became disillusioned with the project until when one day by accident he had zoomed in on one of the photographs and caught a man giving him the finger[1]. Inspired this he went back through every photo picking specific moments where he could the activities of a single person. The findings make for compelling photographs as you can see the stressed, despairing looks on some of the faces of office workers.
Another strength of his work is the number of scales he operates at, sometimes zooming in on specific clusters of activity, other times zooming out to show entire facades. At times he shows the repetitive nature not only the facades but what is going on behind it, demonstrating that a person is no more than a cog in the wheel that is these vertical machines. The flip side to this is when we see a solitary light on in the entire façade where a single man works at his desk, seemingly lonely; on display to Wolf and the World.

Ricahrd Misrach’s work On the Beach is similarly voyeuristic. Instead however of looking into a room he looks out of one; specifically his hotel room in Hawaii. He captures a number of shots of the idyllic beach from an almost plan-like position made possible from his large format camera “eliminating all references to Horizon and sky”[2]. The photographs are sometimes full of people, sometimes focusing on a single person floating in the water, showing his/her relationship with the sand or the water; the surface of which is in amazing detail. Taken relatively soon after the events of 9/11, the photographs display a “sense of unease and foreboding that pervaded the country after the attacks on the World Trade Centre and the Pentagon” 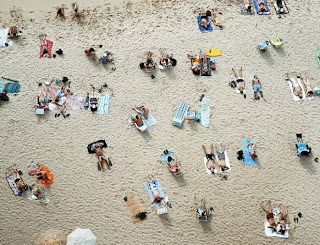