Born in Switzerland in 1924, Robert Frank travelled to New York in 1947 where he worked briefly as a photographer in the fashion industry before returning to travel around Europe.  His return to the United States in 1950 marked the beginning of a decade that would see his work become iconic of a new, contemporary America.  With the help of his friend Walker Evans, Frank secured a grant from the Guggenheim Foundation in 1955 to travel across the States.  Almost two years and 28,000 shots later, Frank produced a set of 83 photographs entitled The Americans.  Received with caution and even resentment at first by critics, this set of photographs has come to be recognised as one of the most iconographic pieces of work of all time.


The photographs were decidedly different from anything previously produced.  Frank gave the viewer a new way of looking at the world as seen through the eyes of the man on the street.  Many of his shots display characteristics of unusual focus and low lighting, but it is through these qualities and good composition that Frank reveals the beauty of the mundane, that which is inherent of the United States at the time – the barber’s chair, the lunch counter, the jukebox.  All of these ordinary things reoccur throughout to compose something extraordinary.


The subject of much of the work displayed in The Americans is people.  Frank captures the fundamental quality of life in each place he drives through on his extensive journey, often pausing only for a moment to capture a handful of frames before continuing on his way with his wife and two children in tow.  This new style of snapshot photography differs greatly from previous masters who constructed the subject of their photographs carefully.  It may also part be attributed to the evolution of the camera which allowed for greater flexibility for the user.  Frank used this new freedom as a form of expression.  Often, what may appear as a coincidental misalignment of focus or frame reinforces the subject matter and can be appreciated as something meaningful, a burst of sunlight through a darkened sky provokes images of something celestial for example.  Another reoccurring image is that of the US flag which often encroaches the primary subject matter, although not the focus of the shot, still representing something iconic and truly American. 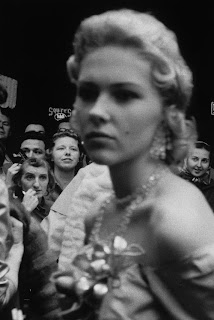 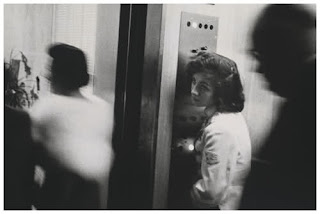 The technique of bringing people to life and forming a relationship with the subject is of greatest appeal to me.  The unidentified girl in a Miami elevator, caught glancing upwards in what appears to be a poorly captured shot as other more distinguished looking people pass by.  Frank captures the ordinary, what he recognises as an American.  Previous photographs of this moment would undoubtedly be of a staged image, perfectly framed and lit with the well-dressed patrons ready and rehearsed.  Here, Frank reverses all of these practices, not without critique, to photograph iconic America.  The same technique is used to photograph the Hollywood star at a movie premiere.  Once again the focus shifts to the unexpected, coincidental inhabitants of the frame, the smiling faces of the public (the squires) in the background and away from the sultry pose in the foreground. Another example includes Frank’s iconic image of rooftops from a window in Bozeman, Montana where the obvious image of choice, a street shot, is overlooked in favour of rooftops framed by the curtains of his hotel room. 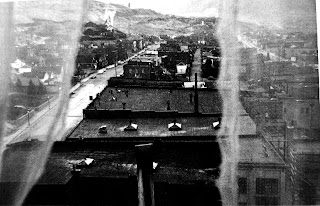 The strength of this style of photography for me is the personal engagement these decisions induce, a feeling of connection to a place and the photographer having experienced neither previously.  Frank identifies the ordinary, captures it in a light which reveals its true significance and beauty before moving on to his next iconic image.
Posted by David at 3:32 PM