Kees Boeke was a Dutch reformist educator, Quaker missionary and pacifist. Cosmic View: The Universe in 40 Jumps is an essay published by Boeke in 1957. It  combines writing and graphics to explore many levels of size and structure, from the astronomically vast to the atomically tiny. 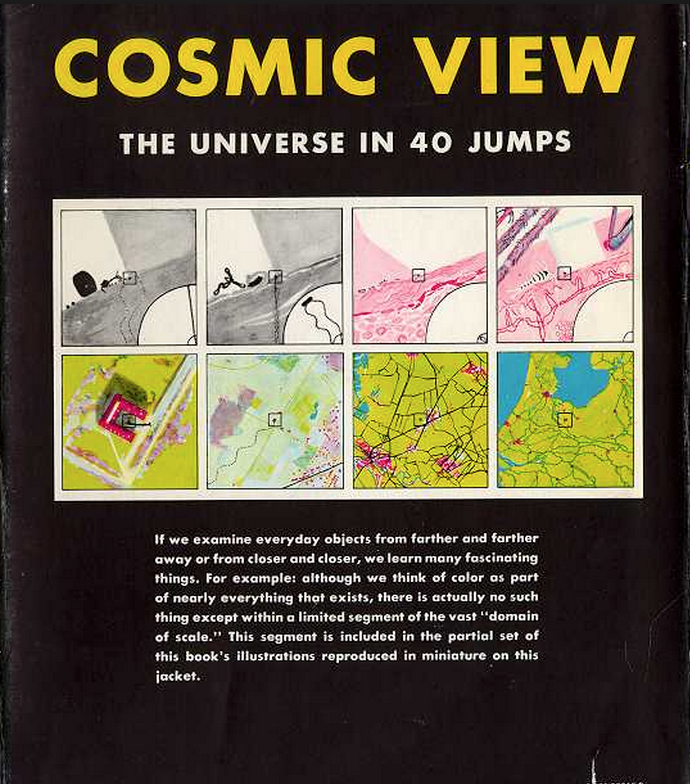 Cosmic View makes explicit the global implications of an expanded sense of scale: at stake is the very nature of what it means to be human. ‘It is a matter of life and death for the whole of mankind’, Boeke argues, ‘that we learn to live together . . . No difference of nationality, of race, creed, or conviction, age or sex may weaken our effort as human beings to live and work for the good of all”

The essay begins with a simple photograph of a Dutch girl sitting outside her school and holding a cat. The essay first backs up from the original photo, with graphics that include more and more of the vast reaches of space in which the girl is located. It then narrows in on the original picture, with graphics that show ever smaller areas until the nucleus of a sodium atom is reached. Boeke writes commentary on each graphic, along with introductory and concluding notes.

One of the most influential of these films was Powers of Ten: A Film Dealing with the Relative Size of Things in the Universe, and the Effect of Adding Another Zero, created by Charles and Ray Eames, first released in 1968 and re-released 1977 , for IBM. It explores this idea of a continuity of scale, and the consequent comparability of the gigantic and the minuscule, by zooming to the outer limits of telescopic and microscopic visibility, one power of ten at a time. The Eameses sought to foster universal understanding of socially beneficial science. To help people understand new technologies and their potential, they produced approximately sixty films, exhibitions, and books for such corporations as IBM, Boeing, Polaroid, and Westinghouse. The Eameses joined with many scientists as visual communicators of their work.
These projects translated complex ideas into simple images to make them understandable to the lay person. The ultimate Eamesian expression of systems and connections is the Powers of Ten. The 1977 film travels from an aerial view of a man in a Chicago park to the outer limits of the universe directly above him and back down into the microscopic world contained in the man's hand.

The short film opens with a view of a couple settling down to a picnic 100. It is set in a park near Soldier Feild in Chicago on a sunny day. The man and woman arrange themselves on a striped cloth; the man lies down, palm on his chest. The film moves to stills and the man becomes an object like the apples or grapes of his picnic; his human measure the centre of the ensuing journey across 40 scales. 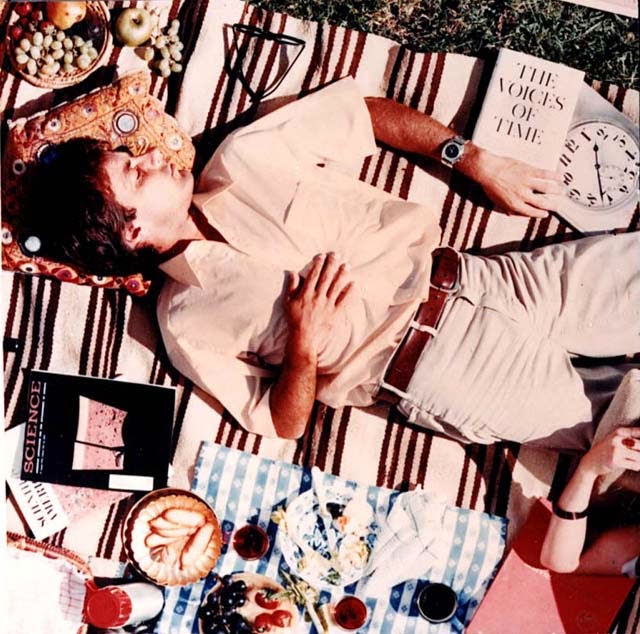 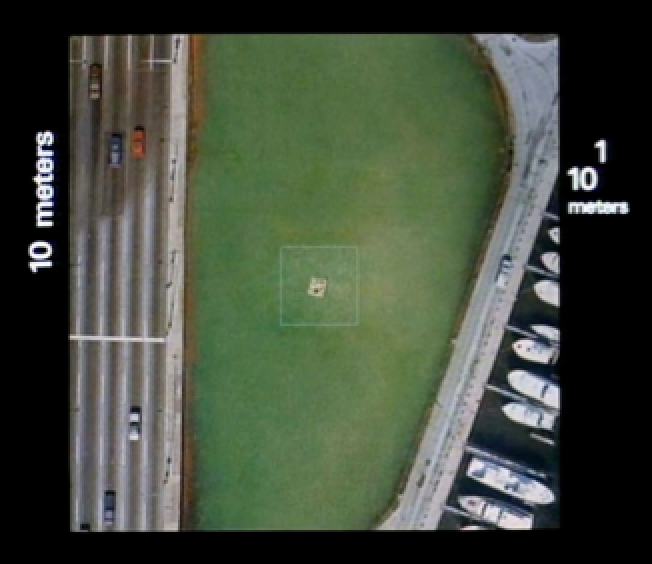 The 3 large scale photos of the Chicago bay area were taken by the Chicago aerial survey , commissioned by the Eames office. The widest shot  10 4 had to be taken from a specially equipped high altitude plane. By 106, we have reached the altitude of the atmosphere, and at 107 we see the entire earth, in a view that clearly is meant to recall image 22727 (‘The Blue Marble’), taken only five years earlier. A few more jumps take us into space and the realm of planetary orbits: the moon, the earth, Venus and Mars. Soon the entire solar system with its nine planetary orbits fills the screen, but by 1014, it has dwindled to just one point, the sun like any other star. By the time we arrive at 1022, the Milky Way is merely one small point of light, one galaxy among many. At 1024 we are given a moment to contemplate the lonely reaches of space, where entire galaxies have shrunk to the size of dust. 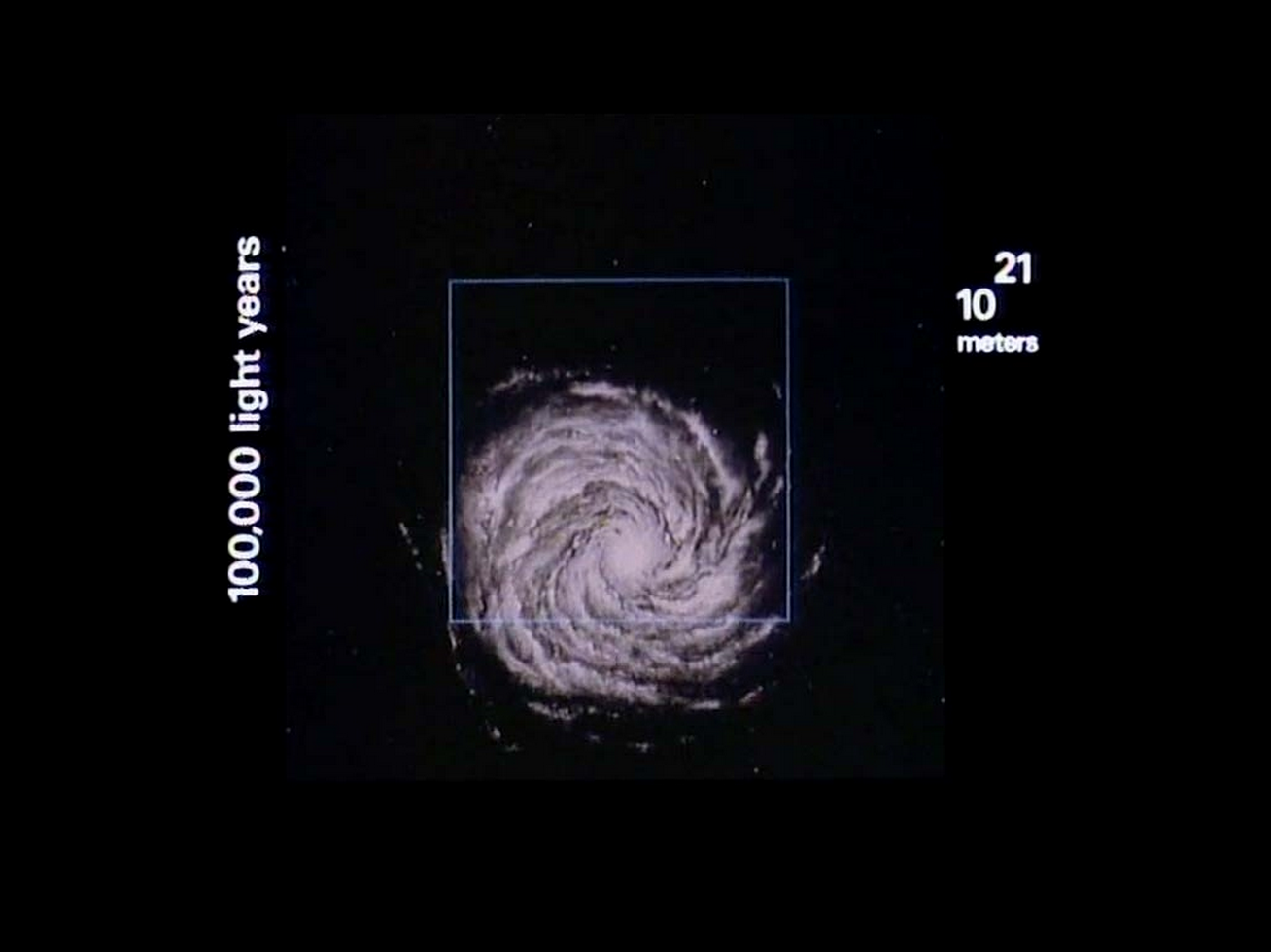 We now penetrate the world revealed by the microscope.
The man’s hand is the focus, both the starting point and the symbol of scale. At 10–2 the hand’s surface, enlarged so its lines seem like immense furrows, comes into view; at 10–3 we penetrate the skin and enter one of its blood vessels. Moving down even further to the atomic scale, at 10–10 we encounter their outer electrons in a view whose black background spangled with white dots resembles nothing so much as the outer reaches of the universe. At 10–12 the cell’s carbon nucleus, ‘so massive and so small’, with its six protons and six neutrons, comes into view; at 10–13 we reach it: the universal module, building block of matter and of life. At 10–16 the film ends in a riot of subatomic motion and colour. (Di Palma, Vitoria) Powers of Ten illustrates the universe as an arena of both continuity and change, of everyday picnics and cosmic mystery. The film also demonstrates the Eameses' ability to make science both fascinating and accessible.

Watch the Powers of Ten: https://www.youtube.com/watch?v=0fKBhvDjuy0