Views of the City

Our project is concerned with both looking up and looking down on Grafton street, significant on this street where shop fronts and advertising are composed to streamline the view to one level. This is not necessarily a commentary of this particular street, but a relevant inquiry into how we see Dublin city and other cities today. 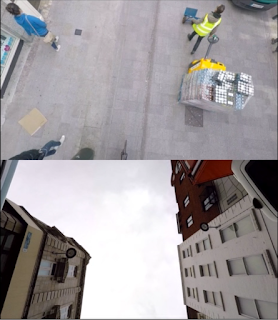 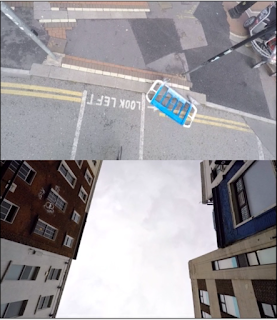 Stills from footage looking up and down

The intention of the project was to question the city, to expand our knowledge of it and to show it in the form of a composed view from which the observer can procure his or her own ideas. The challenge of composing a view is where to begin. Kevin Lynch, in his book 'Image of the City' alludes to our comfort on a street; “We are supported by the presence of others and by special way-finding devices: maps, street numbers, route signs, bus placards. But let the mishap of disorientation once occur, and the sense of anxiety and even terror that accompanies it reveals to us how closely it is linked to out sense of balance and well-being” 1. The views we have chosen to bring together are disorientating, as is the way we have decided to show it, by projecting on to the ceiling. The idea of challenging the viewer comes both by disorientating them and giving them views, which are abstract, where the only direction is that which the camera decides. In this sense, while the view may be out of the comfort zone of the observer, they are still being carried and shown the way by the stream of video.

John Berger reminds us in 'Ways of Seeing' that “Seeing comes before words, the child looks and recognises before it speaks” 2 It was in two views which only an infant is used to perceiving which we thought could best illustrate our question to the city. It forces the observer back into a state of infancy, being carried through the street. Looking up from a height of just under a meter, as if being pushed in a pram, and an exaggerated piggyback on the shoulders of a giant, looking down from a height of five metres. This defamiliarization is not a new technique. In the story Kholstomer (the story of a horse) by Leo Tolstoy (1886) 3, it shows the human world from the viewpoint of a horse, exposing the irrationalities of human convention. It is these conventions that our project may begin to question. Without the shop fronts in view we begin to further question our habitation of the street.

Ed Ruscha’s “Every building on sunset strip 1966” 4 has both similarities and contradictions to our project on Grafton Street. Ruscha takes single elevation photos from a moving truck, sticking them together, with no other reason than to show what is currently there. The repercussions of his work, then and today, showed the viewer a moment in time. It disseminates the social, economic and culture of the period. We are presenting two views which are unfamiliar on this street. What we show is the background to what the viewer usually sees on the street. Our interest in this says something about where and what we were pushed towards in this project. It is a disposition away from the commercial, from the ordinary, which we found a need to communicate. 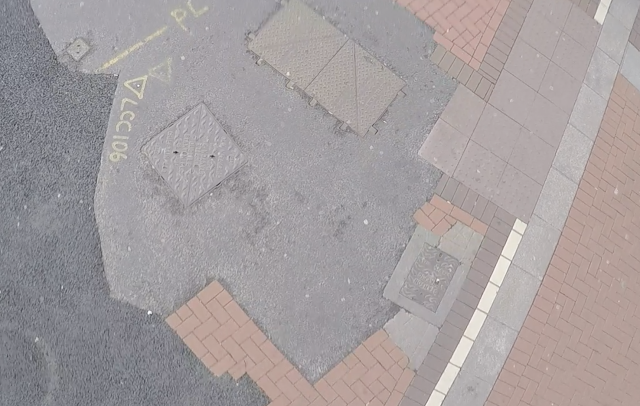 The view questions our relationship with ground and sky on this enclosed and narrow street. In one sense it longs to soar above the buildings and out of the built environment. The other, looking down, is more inquisitive as to the built environment. The breaks in granite paving, filled with tar, or the milieu of red brick ground cover, displaced or skewed, give us a sense of inhabitation and history. These images from the video remind us of Andreas Geffellars 5 work, which takes the unfamiliar view, the unpopulated view, yet one with memory of inhabitation and shows it to us in stunning detail. It is inquisitive of both human habitation and the left overs of habitation. Geffelars photographs, while becoming about human habitation, rarely has people in them, where our video has people, many of whom do not notice they are being filmed. This provokes a sense of surveillance. David Rokeby 6 talks about the power of these technologies and visual artists in his essays, bringing up the ethical side, where “subjectivity and control” are the main issues. He hints at the idea that we may be “in danger of becoming apologists for industrial, corporate, and institutional uses of these technologies.”

Stills from video footage looking down

We are so rehearsed in seeing Grafton Street from eye level, that when it is shown in this extreme way it becomes ever more interesting. It adds a depth to the layers which the viewer already understands. What our projection will physically show are the tops of buildings and the ground cover on Grafton street. We see people move past these views from uncommon angles, yet it still shows occupancy. When we see people occupying the street it does give us a familiar starting point. It points to this view as archive, and survey.

To exhibit our work, we will use the main entrance hall in the Richview house. Including the bicycle which we used to film both views was an essential part of our thoughts for the exhibition. By building a frame to hold both the bicycle and projector, where both depend on each other, it shows reference to both method and exhibition in the same piece. A frame holds the bicycle steady, while also holding a perforated box, which carries the projector. The bicycle counterwights the frame, allowing the perforated box to be suspended between two timber elements and appear to float. The projector plays the videos on a split screen, which will loop approx. every 10 mintues. 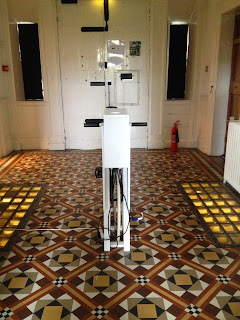 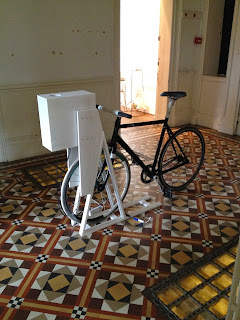 Labels: Andreas Gefeller, David Rokeby, Ed Ruscha, Grafton Street, Image of the City, Surveillance and the Camera, The story of a horse, Views of the City, Ways of Seeing