’Then, quite apart from all those literary preoccupations, and without definite attachment to anything, suddenly a roof, a gleam of sunlight reflected from a stone, the smell of a road would make me stop still, to enjoy the special pleasure that each of them gave me, and also because they appeared to be concealing, beneath what my eyes could see, something which they invited me to approach and take from them, but which, despite all my efforts, I never managed to discover.’ Marcel Proust-Du Côté de chez Swann

In Walter Benjamin words Proust expresses his fascination and defends the ’new Romantic conception of cityscapes’.[1]
Cities replaces the embraced beauty of natural landscapes in the perception of many novelists and writers, like Charles Baudelaire, Marcel Proust or Amédée Kermel. The flâneur becomes a leading figure in the 19th-20th century narratives of, mostly french, authors. He is defined as wanderer or idler, who is observer, but at the same time is a part of the events occurring in city life. Baudelaire compares the need of the flâneur to belong to the crowd to birds who need air. The flâneur experiences and dreams in the city by moving through the built environment.[2]  Furthermore Baudelaire’s understanding of the flâneur was a city man ’driven out of the private and into the public by his own search of meaning’.[3]  This suggests that the flâneur wanders around in order to search for his own identity and that the city acts as a catalyst in this process.

It is interesting to mention that the theme of the flâneur was not only related to urbanism, literature or sociology, but can be found in fine arts. Lee Friedlander, an American photographer, is fascinated by cityscape and in which environment we live in as individuals. Moreover ’he is a part of the flow that he records’.[4]
Friedlander captures the things, which attracts him as a viewer the most and exposes it in his photographs.Through his work he tries to see the city in a new perspective by showing the beauty and sharpness of our immediate surrounding.
Many of his works focuses on aspects like reflections of glass and objects or the superpositions of people, who are unaware of each other, but are connected to each other through photography. So how significant is it to discuss the importance of the flâneur in our contemporary society?

Townspeople tend to use the same paths and roads in order to arrive at school or at work or to the grocery shop. The city life is featured as restless, multicultural inhabitants offer diverse life styles and the composition of old and new urban structures foster the discussion about the historical and modern identity of a city. But how intense do the inhabitants and the observers look at the cityscape’s in its entity?

Our group, Lucy, Arwin, Christina and I, therefore thought about combining this thought with the desire to define the modern flâneur of the 21st century. The theme of this semester 'Photography and the City' offers to argue the role of the photographer in the city and how to understand it through a two-dimensional effigy.
Hence we want to investigate our idea by elaborating a specific aim: to rediscover the city through photography. We want to create a new platform for the local people, who know already their city, by showing them new sides of their city. Photography acts as a medium in order to capture ’everything’; pictures in different scales present the unseen and unnoticed details or movements, which happen all at the same time. Every picture is unique and its composition reveals the hidden synchronistically movements and facts of the location. A new connection is made with people, who perhaps don’t know each other in real life, but at the photograph they are united and seem to express a story related at a specific time. Another aspect of the photographic language is also, how the photographer interacts in the scene.The dialectic relationship of the photographer, who is himself a flâneur and simultaneously captures other flâneurs and the direct surrounding.

A good example is Kohei Yoshiyuki’s project ’The Park’ (1979). The photographer breaks limits by ’creeping up on people’ in various parks in Tokyo. Yoshiyuki observes couples during sexual intercourse and reveals at the same time other voyeurs of the scene. It shows the reality of city life in its darkest hours and shows how the spectators of the scene want to become a part of the scenery. The photographer becomes one of them by capturing as an outsider this elusive moment.
With our project, we want to arise at the same time the question of how involved the photographer is himself as a flâneur and how captures other flâneurs’ perspectives. 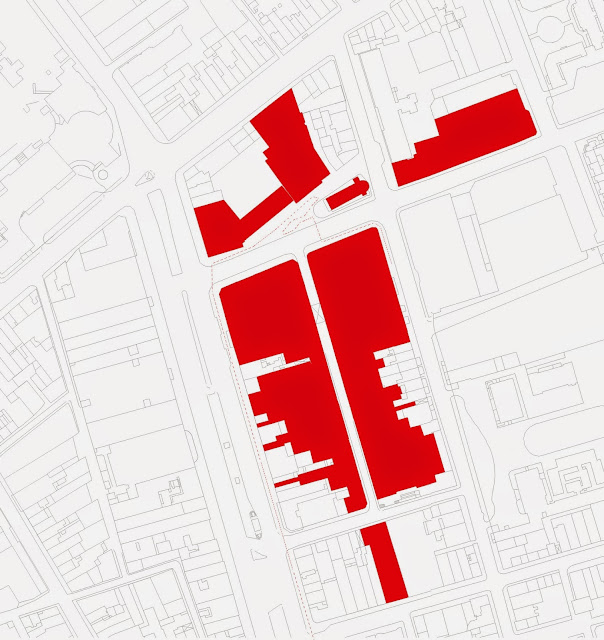 Which location would be the most suitable for the project? Which kind of camera is suitable for the pictures? All these questions have been important in order to define the focus and the way we want to interact as a flâneur-photographer.
Therefore we decided to choose Findlater Place-Cathal Brugha Street as our focus.
The site is featured by different functions like Bord Pleannala, St. Thomas Church, DIT College and Catering and the Living Room, a well visited pub. It is one of many side streets of O’Connell Street, which divulges unexpected moments of the city. Mostly users of the different buildings or people using the bus station are traveling along this place. The place is being used differently throughout the day: different users come at different times.
Our goal is to compress through photography the different moments and people using the space. The captured moment should be a tool in order to feel the different perspectives of every flâneur. We decided to use digital cameras like Nikon D200 with a Nikkor 80-200 mm F2.8 lens and a Canon Powershot A3300 IS. They enable different ways of focus and capture with high quality small details.

After exploring what we want to create, we thought about how to exhibit our work. During the second half of the semester, we thought about variations of framing individual pictures and to arrange them on the wall. Another idea was to create through many individual images a collage like panorama picture leaned on David Hockney’s work.
We opt for coloured photographs inspired by William Eggleston’s work.The American photographer is well known for his colour film images and documents artifacts from the American everyday life and creates storyboards rich in contrast like it is kept in record in ’Los Alamos revisited’. In this book, his images have been rearranged and stories have been set up through the page composition. Therefore we chose the book format in order to create and compose unique photographic compositions. This option enables the viewer to to filter and to take time for creating his own stories through the photographs. The book allows the viewer of the photographs to travel in time with the people in the images.

This project has been challenging in a way how to learn to perceive the familiar urban districts in a new way. As architects it is essential to understand space as a multilayered platform and we need to see how people interact in this space. The architect, the photographer, the sociologist etc. have to become themselves flâneur and need to capture several perspectives in one image. The connection of architecture and photography is extremely precious as both can act as a supplemental resource to each other. Photography enables to retain specific moments, events and persons in time, to even freeze them in time. Hannah Arendt claims that public realm can ’survive the coming and going of the
generations only to the extent that it appears in public’.[5] These photographs make the motives in public realm eternal. Architecture in turn offers the space which captures photography and is a part of the external perception of space.

My own investigation Marlborough Street-Parnell Street (near study area)

It would be interesting to explore more possibilities of photographic tools in order to bring the project a step further. How would it be if the images were more saturated? Or everything would be rather black and white. There are many ways and possibilities to push the project.
Additionally we could try like Yoshiyuki to be more an active photographer in the flânerie scene, to be more active in the events of the city life. We have been silent spectators in order to highlight the events on the site. But how about bringing the photographer as a flâneur more consciously into the scene?
Nevertheless I think it is important to point out the learning process of this project. I have to say that by comparing my primary knowledge in photography with my present acquired knowledge, I learned to see photography even more as a way to examine the surrounding of a specific site. The longer you stay at a place the more you become yourself as flâneur and a participant of the space.