Constructing The View : Photographers in the City

After a semester of researching different street photographers - Helen Levitt, Gary Winogrand, William Klein - and their work I have written this short text on the influence of photographers on the idea of cities, how photography interacts with the urban environment and how cities influenced photography. I have been thinking on the influence of photography on architecture, I tried to base my study on cities where architecture is all around and frames every picture. The cities can be experienced from different point of views but also from different interests and reasons. I am exploring photography in cities on the streets, then look closer at the built environment to finally end on the view of the city, its atmosphere and identity. Photographers from around the world have taken pictures of New-York City but no one did as well as photographers from the New-York city itself.

Garry Winogrand was born in Brooklyn (1928) and spent most of his life taking pictures of people in streets. His technique of photography was the most appropriate to the type of "snapshots" pictures he took of street life, "when in doubt, click".
City streets is usually where people are on their way somewhere but it is also where you can see people waiting, looking for a cab, eating or discussing. The streets is where you know the feel of a place, its energy and its people. How people interact to each other will tell you about the neighborhood.
Street photography is not about depicting societies problems or sharing a social message or to depict a certain life style but its really about showing the beauty of humanity.
Helen Levitt shows us childrens and their games, Gary Winogrand shows us woman walking, Diane Arbus shows us people "marginal people" and Tod Papageorge shows us people enjoying Central Park on a lazy day. These pictures weren't intended to make the viewer realise something about humanity but to enjoy and take in the energy and panache that some of those pictures can transmit.
Street photography is portraiting humanity, inhabitants of the streets, their reactions, their interactions, their energy.

Garry Winogrand would go all day in the streets to take pictures and enjoy the dynamism of people and to capture it. He was aware of everything that was going on around him, shortly watched  into the viewer changed a few settings faster then he would think and snap his finger down. He was fast and systematic. He would only stop to change the roll.

His best pictures are thanks to circumstances and to is rapidity. He never let a chance go. He pushed his camera to its limits with the full height portraits of woman walking the streets showing their movement and elegance but also their perplexity to this man photographing them. He also tried to create new interactions and movement through tilting the camera. Winogrand chalenges our usual view of the world and photography with the walls and ground tilted in diagonal to the frame. "We are reluctant to the visual truth of those pictures" ( E.H. Gombrich) but he still includes a signpost or object that is parrallel to a side of the frame to give an anchor.
Street photography doesn't need or try to inform you about street life but just tries to convey its energy, power and life.­­ 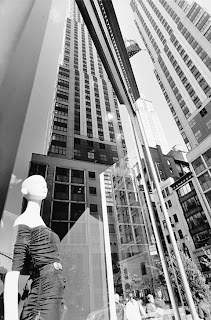 Although Lee Friedlander is also known as a street photographer and is a contemporary of Garry Winogrand  his choice of subject and his style of photography is very diferent to his peers.
Lee Friedlander (1934) photographs the built city and its impact on the urban pedestrian. He was influenced by Eugene Atget a parisian photographer that tried through photography to enable the atmosphere of Paris.
Cities are highly constructed, made of concrete, glass, stone and steel. They are imposing and majestuous especially when thinking of New-York. The are made to extend in every direction, they are dense and functional.
How to depict these facettes of the city? Photographers had the challenge to fit all the information in or where or when to crop out the excess information.
Lee Friedlander captures what he can't frame from straight on without distortion in the reflection of a vitrine. He shows the hussle in doorways to the hall of a building, and the signs and facades of shops. These elements of the city portrays its indoor activity, its shops, restaurants and its tall neighbours filled with appartments and offices.
William Klein also depicts New-York city in New-York 1954-1955. He zooms into the signs and luminaires that covers New-York city. Cities are made of images, signs, writing and lights that gives information and advertisement, it is all about selling and buying.
Alan Callaghan photographs Chicago where he shows through the shade in the street the existence of the L - the elevated tube that loops around the city centre. The L is a main part of Chicago's identity and built environment and instead of photographing the tracks he shows the space that the tracks create underneath in the street.

The difference in photographing the space made of the street rather then its activity demands for a wider lens camera and still a quick shutter speed to include more in focus but avoid the blur that would appear from street activities.
Lee Friedlander takes photographs of objects or people interacting with facades and urban objects. His photography has a more 2D aspect to it with the play on planes but using reflections to add another dimension to his images and using them to give context to the shop or to the city. Is it how people experience the city and its streets? Do they see the mannequin or the menu and not what is behind it or behind them? Lee Friedlander materialises in his pictures a new way to depict the context within the object. - the mannequin within the building across the road.

Thomas Struth is a german photographer that studied under Bernd and Hiller Becher. He arrived in New-York thanks to a scholarship and made black and white pictures of New-York street's. They are empty of people but full of life. The residential buildings, the cars and everyday life objects prove the existence of people.
Cities are an urban landscape like a natural landscape they are composed in planes and grounds showing its history, its style, what it is proud of or its failures.
The automatic idea of a view to a city is its skyline but I find Thomas Struth's phictures a more elegant way of showing a view of New-York city. It might be at street level but it depicts its content. They don't show it as a local would but it is pure and still more magical by its grandeur! 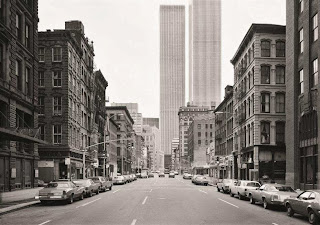 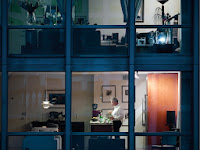 Michael Wolf in his series Transparent city took pictures of views into people's homes. His pictures are flat and framed by the windows themselves but he represents the identity of Chicago. When you are in the L and you see straight into offices from the seat in the wagon it is an experience unique to Chicago and its elevated public transport. Michael Wolf uses that idea to look into people homes. His pictures are intrusive but they also illustrates how in cities the view you get from your office or appartment isn't a view of the city but a view on your neighbours living rooms.

The view of a main street is possibly the best way to describe the towns influences but the picture of Ground Zero is probably the best way to show New-York's history. The view of a city should give you a sense of identity. You recognise it and the essence of the city is described.
Through the study of the work of photographers in cities in the last 60 years we showed the extent of an images produced and possible to depict different aspect of this agglomeration of buildings and people. Photographers went to war or journalism to "get closer to the action" or went into advertising. Photographers in cities weren't given a task but took pictures of their own environment and what seemed to inspire them.

Photography is probably one of the best medium to capture the energy, movement and life that comes from its streets. Photography also allows you to contemplate your surroundings. Photography travels the world easily to show what cities look like and possibly feel like. When constructing a new building or a new part of town, renders and realistic renders will be made to inform the design decisions. Cities also have been influenced by the spread of photography and images through advertising, signs and flashlights but more importantly cities are a place of progress in many subjects as well as art and culture. Cities and their esthetique and identity have influenced many photographers like Michael Wolf in Hong-Kong where he photographed passengers on a packed public train. Garry Winogrand loved photographing his city because of its energy and how well he knew the streets and the behaviour of people.
Posted by Unknown at 12:17 AM