Truth and Photography - An Essay Outline

Photography has a direct physical relationship, through chemical processes that links it to reality, which presumably makes it free from subjectivity.

“The daguerreotype is not merely an instrument which serves to draw nature, it gives her the power to reproduce herself.”
Louis Daguerre

“Painting can feign reality without having seen it, contrary to imitation in photography, I can never deny that the thing has been there."
Roland Barthes

Photographs have become tantamount to evidence, evidence which has the ability to drastically alter the world. e.g - aerial photographs and the Cuban missile crisis

“Photography has redefined societies understanding of information and truth ‘truth is in the seeing, not in the thinking”
Neil Postman

THE SUBJECTIVITY OF PHOTOGRAPHY

Sontag believes that by applying immortality and importance to certain subjects you are changing their significance and possible interpretation.

“[Photographs are] as much an interpretation of the world as paintings and drawings are.”
Sontag

“The human subject becomes less real through the process of being photographed…make another body for myself, transform myself in advance into an image”
Rolan Barthes

This self-awareness and attempt to ‘create an image in advance’ works on a larger level. There are attempts at controlling how photographs are perceived, propaganda, photo-ops etc.

“[Photography alters reality] whether through retouching, use of filters or lenses, selection of the angle of photography, exposure time, use of specially prepared chemicals in the developing stage, or adding elements through multiple printing. Traditional photography, therefore, also possesses process that can attenuate, ignore, or even undo the indexical”
Tom Gunning

Photography creates a partial frozen reality, from a particular point of view. Even without retouching, photography can lie by omission. 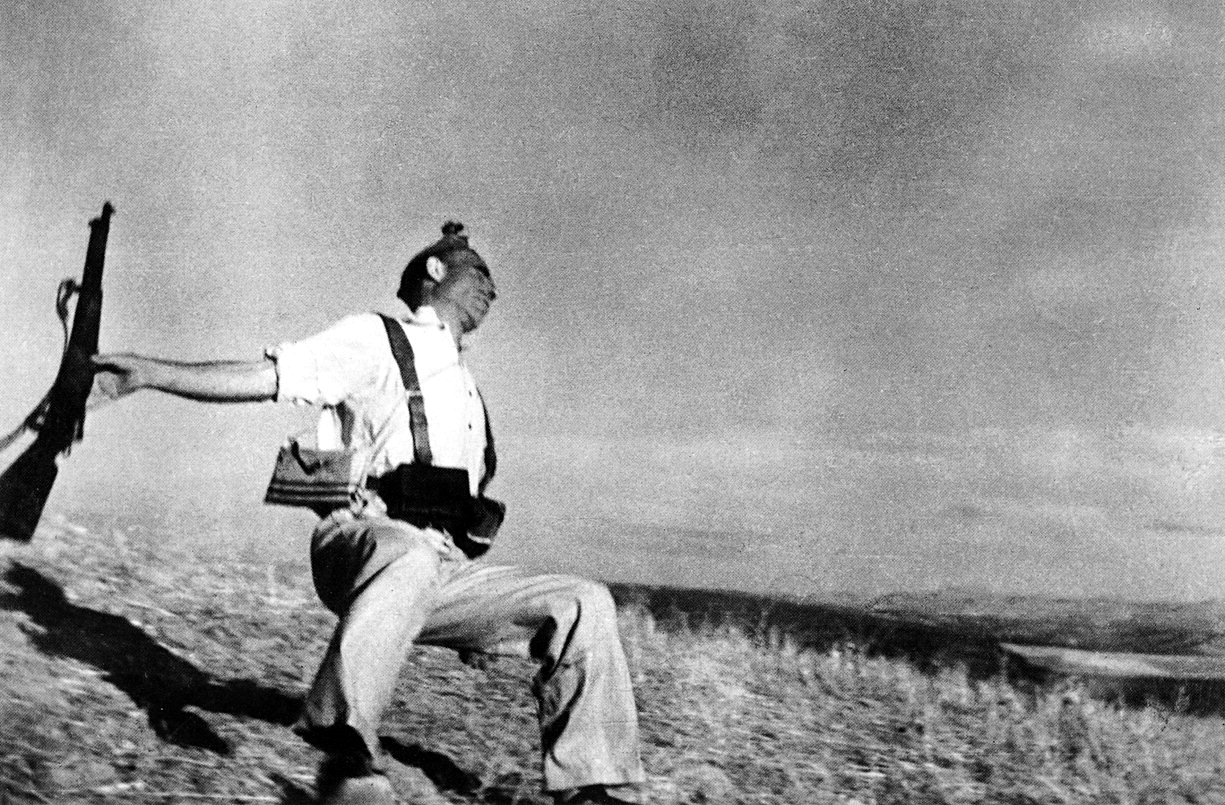 More than likely posed, perspective, quality and nature of the photograph are very suggestive - We see what we want our experience teaches us to see.

Eddie Adams – Execution of a Viet Cong Prisoner of war.

The prisoner in the photograph had killed twelve people that morning, including the family of the friend of the executioner.

Photograph (which became more potent than the television footage of the same event) created turnaround in public support of the war… in a country that  largely supports the death penalty for murder.

It was suggested that the general staged the photograph because the AP were there, as a warning to other Viet Cong. Photograph caused international contrversy, the photographer won the Pulizer prize, and took his own life shortly after.

The was taken at a UN food depot, the child’s mother was likely nearby receiving food. The use of a telephoto lens, exaggerates the relationship between the vulture and the child.  Other people present have said that Carter chased the bird away after the photo was taken.

Photographs of the Holocaust The Holocaust – “this historic event marks the limits of representation”

Photographs taken by Nazi officials, to document construction and medical experiments in the camp.

Nazi propaganda photographs – silenced worries about the brutality of the camp.

Photograph’s also taken by German soliders, visiting during leisure time. ‘Tourist photographs’ – ‘light-hearted’ many of which were found in wallets of dead German soldiers.

Photographs do not show the acts, buracracy, planning and decisions behind the camps, just the incident.

Freeze framing makes it impossible for photographs to do justice to the professional quality of history.

Despite this is signifies something. It’s abstraction lends itself to becoming a symbol, and can lead to abstract emotive ideas.

IS THE UBIQUITY OF CAMERA PHONES AND SOCIAL MEDIA MOVING US TOWARDS A FAIRER FORM OF PHOTOGRAPHY?

In the hour following 9/11 attacks in New York surrounding gift-shops were sold out of disposable cameras.

“A desire to make real what I could barely understand”
-E. Ann Kaplan

Photographs abstracts reality, in this case makes something overwhelming, easier to grasp.

Leads to unbiased, less premeditated photographs, the volume of them creates a variety of. The amateur nature of the photographer, combined with the nature of disposable cameras/camera phones means that the photographer had no control over zoom, aperture, film type, or development.

Does this lead to a more honest depiction of an event through photography.

Some argue that truth in photography lies in studying subtleties - subject poses, gestures, dress, relationships between people – a secret language, this can transcend the intent of the photographer. Walker Evans - Farm Security Administration.

Through familiarisation photographs can become devoid of information, and become symbols, or motifs, rather than something worthy of critical thought.

As this they may be capable of reinforcing knowledge that already exists.